The store will not work correctly in the case when cookies are disabled.

Thanks to Sparkfun for this tutorial.
We are now able to connect all the needed components into the Blueprint.
This Blueprint also includes external products with back-links.

Light up your love with paper circuits this Valentine’s Day - no soldering required! This tutorial will guide you through how to create simple paper circuitry using only copper tape, a coin cell battery, a LilyPad Button Board, and an LED. 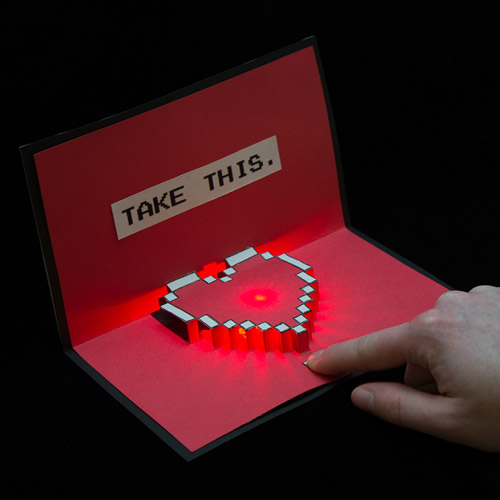 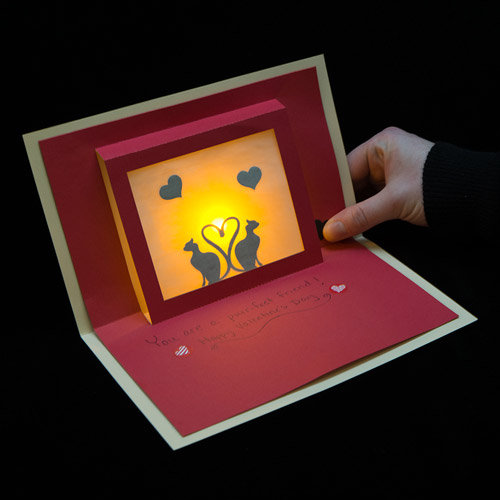 We’ve adapted some free pop up templates for use with electronics. We’ll be covering the electronics build in this tutorial and linking to the original project’s instructions for the pop up parts.

Why Aren’t We Soldering?

In classrooms or homes where supplies or budgets are limited, using tape and craft supplies helps keep complexity down. The drawback is that the connections aren’t as sturdy/permanent with tape vs solder. You can always use these templates and solder components to the copper tape if you have the supplies on hand.

We recommend using the smallest LED you can find - 3mm work well because they don’t add too much bulk to your card when folded. For extra flair, try using cycling RGB LEDs. We’ve also found that cutting individual LEDs from a set of LED String Lights works well - you will have to use a hobby knife to scrape the coating off of the wires before using. We’ll cover that process later in the tutorial. Feel free to experiment with different LEDs to find what works best for your project.

Right-click the images below, and choose “Save Link As” to download the templates to your computer. Each file has a circuit template page and a pop up template page.

Print your templates out on cardstock. If needed, adjust your printer’s margins, or choose ‘Fit to Page’ in the print settings. The card template is slightly smaller than the paper, so make sure to cut along the black border for the final card size.

Set the pop up pages aside for now. We’ll build our circuit first and then assemble the pop up once the electronics are all installed. 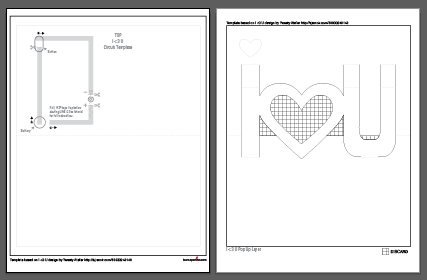 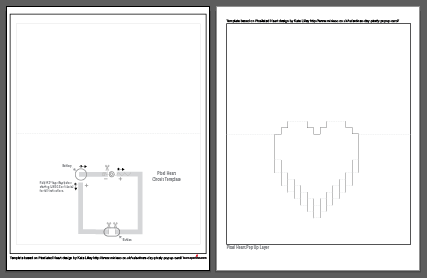 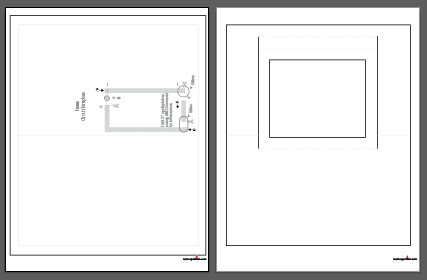 Time to create a path for our electricity with copper tape. We’ll be demonstrating with pictures from another paper circuit project, but the process is the same for these cards. Each has icons to help guide you in constructing the circuit.

Take a look at the template and find the circle marked A. Peel away a few inches of the paper backing from the copper tape and stick down along the grey line. 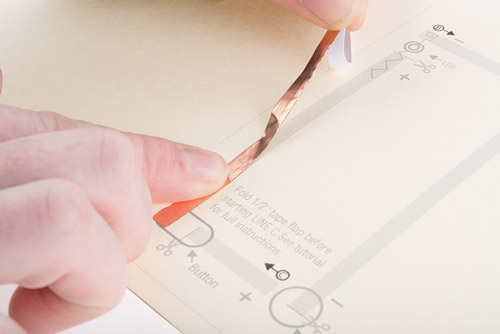 Cut when you reach the scissors icon. 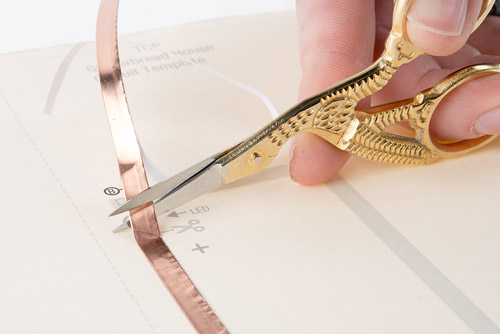 Next we’ll place tape along Line B which includes a corner. To keep a solid connection of copper around corners, we’ll be using a folding technique to press the tape into shape.

Start by sticking the copper tape down until you reach the corner, then fold the tape backward on itself. Use a fingernail or pen to give it a good crease at the edge. 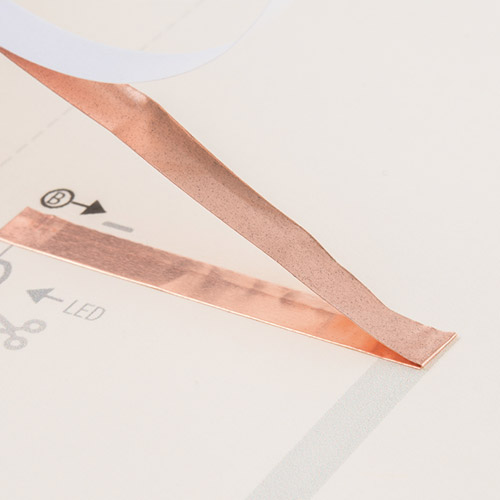 Then carefully move the tape down around the corner - you should see the fold forming - and press down flat against the paper. The neatness of the fold doesn’t matter that much, it will be covered by your pop up in the end. Finally, cut the tape when you reach the scissors icon. 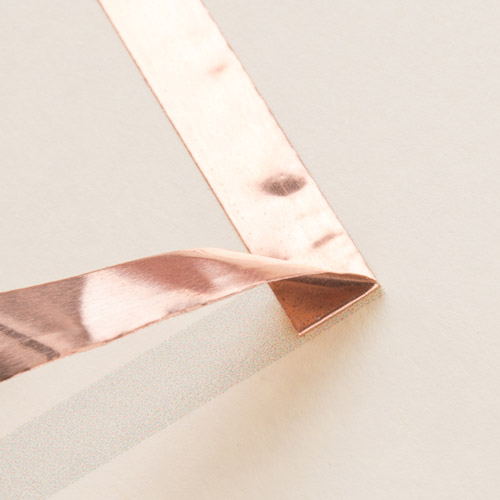 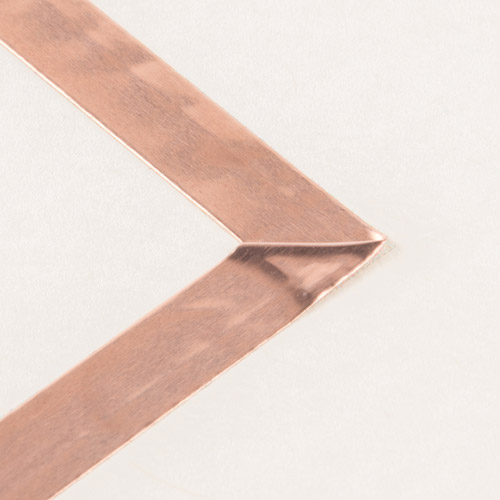 The last copper tape line will also form a battery holder. We’ll start by folding ½" of copper tape onto itself, sticking the adhesive sides together to form a flap. 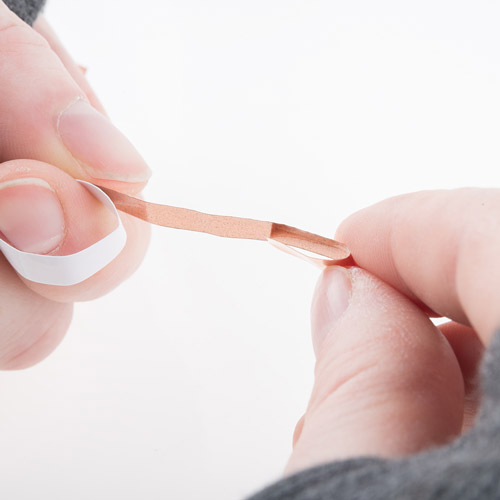 This allows the top of the copper to fold down over the coin cell battery - the positive side of the battery is the top and negative side is the bottom, which allows us to create a ‘battery sandwich’ with copper tape touching each side. 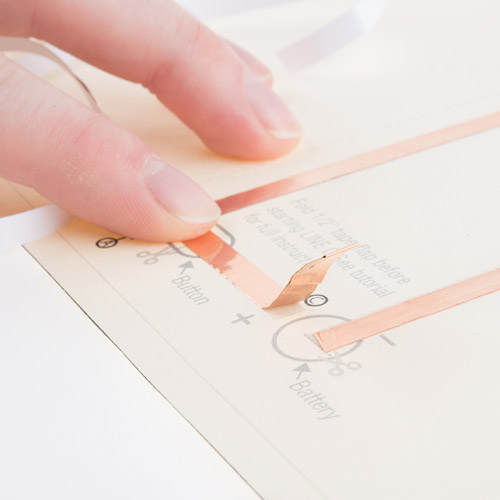 See the diagrams below to explore how this method works. We won’t be installing the battery until the end of our project, so set that aside for now. Fold the card in half along the dotted center line before moving onto the next step.

Before prepping the LED, fold the card in half along the dotted line to save the hassle of trying to make a neat fold once there are components sticking up from the paper.

Now that our copper is in place, time to add the LED. Each template has an LED symbol which shows a shaped wire - we use this method to help us remember which side is positive and negative on the LED.

“In electronics, polarity indicates whether a circuit component is symmetric or not. LEDs, being diodes, will only allow current to flow in one direction. And when there’s no current-flow, there’s no light. Luckily, this also means that you can’t break an LED by plugging it in backwards. Rather, it just won’t work. The positive side of the LED is called the “anode” and is marked by having a longer “lead,” or leg. The other, negative side of the LED is called the “cathode.” 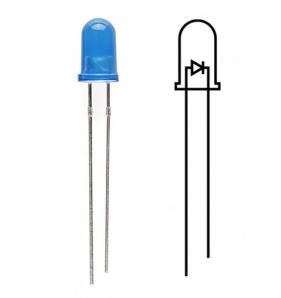 Here are directions for bending a standard LED (as shown in the image above) to prepare it for our circuit.

Using pliers (or your finger), bend the longer leg of the LED flat. Then form the wire into a zig zag shape. Be careful not to break the wire by bending back and forth over the same joint too many times. 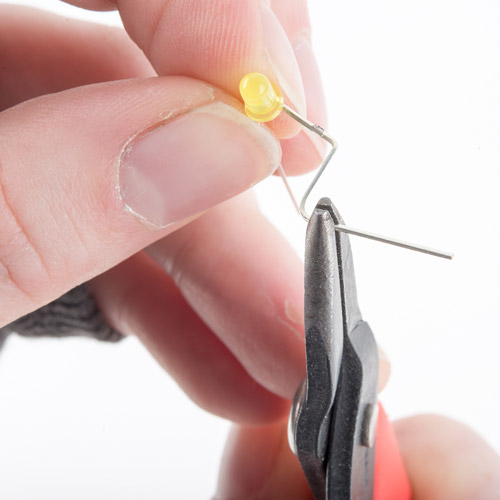 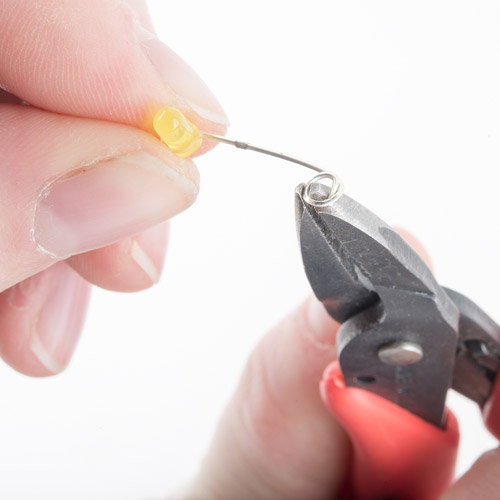 Once all shaping is complete, place the LED on a table or flat surface to make sure it sits flat and upright. If not, make any adjustments now. 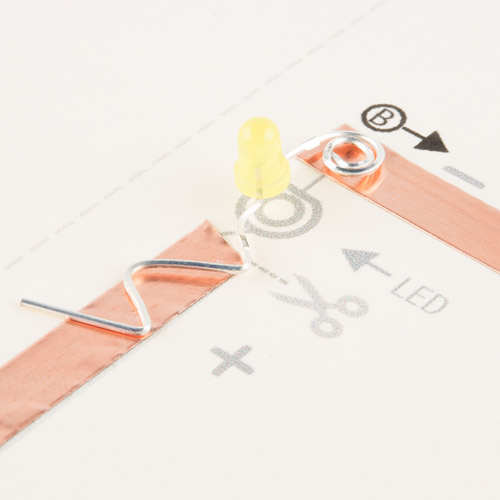 We’ve been experimenting with cutting up LED string lights, because they use tiny LEDs that are great for flat surfaces like greeting cards. Cut one LED off of the strip, making sure to leave ~½" of wire on either side. Then use a hobby knife to scrape away the coating from the wire to expose it. Make sure to scrape all around the wire, not just the top or bottom side, to ensure that you’ll have a good connection with the tape. Sandpaper will also work, if you don’t want to use a knife. 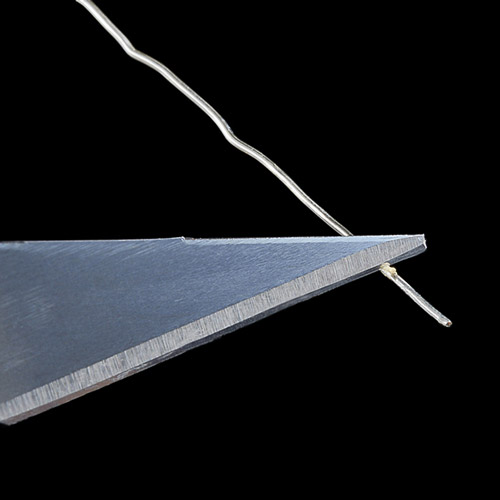 Each LED will have four wires coming from it - two positive and two negative because the LEDs are wired in parallel. It’s hard to see immediately which is which (they don’t have the handy longer/shorter trick like normal LEDs) - but we can quickly check them against a battery. Once we know which side is positive - mark the wire with a sharpie to help identify it. It’s okay to just leave the wires straight rather than shaping them like the other LED example. 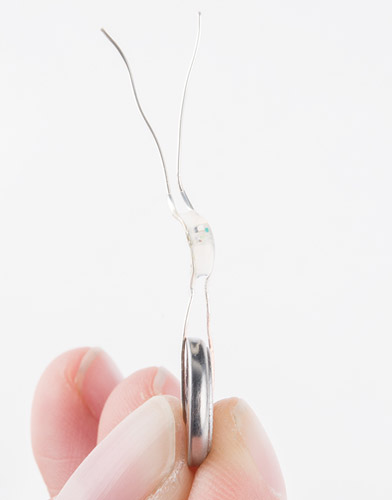 If you have super eyesight - you can check for a green marking on the LED, this is the negative side. 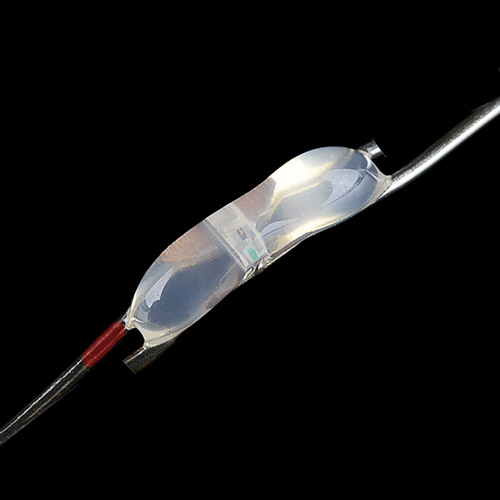 This picture shows an LED from a string light prepped by identifying and marking the positive wire and trimming the extra wires so that they don’t accidentally short circuit each other.

Regardless of which LED type is going into the card, line up the positive lead with the copper tape marked + and the negative with -. Use clear tape over it to hold down to the copper. 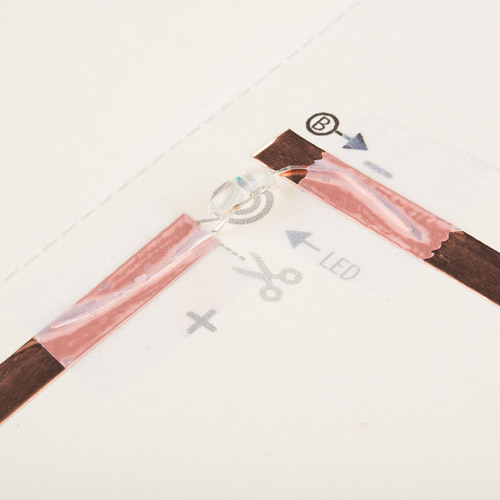 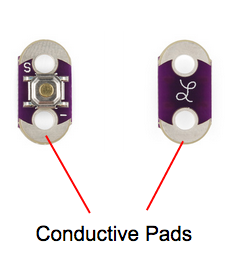 Next, we’ll place the LilyPad button over the oval icon on the template facing up. It doesn’t matter which side touches postive and negative. Make sure the conductive pads on the bottom of the button touch the copper tape, then tape down the ends with clear tape. Be careful not to tape directly over the push part of the button, or it may interfere with the ability to press it. You can also use a LilyPad switch instead of a button - the installation is the same. 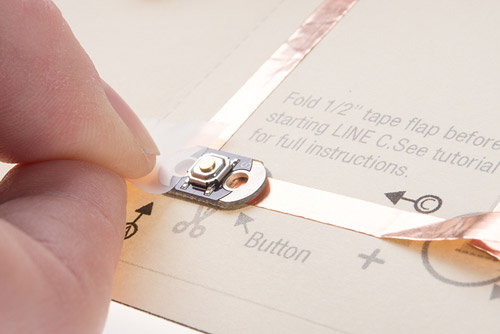 Once all the components are installed, it’s time to test our circuit by adding a battery. Carefully slip the battery underneath the copper tape flap we made earlier, and center it inside the circle icon. Make sure the positive side of the battery (top, marked with the battery model and +) is facing up. Press the copper over the battery, and tape with clear tape. 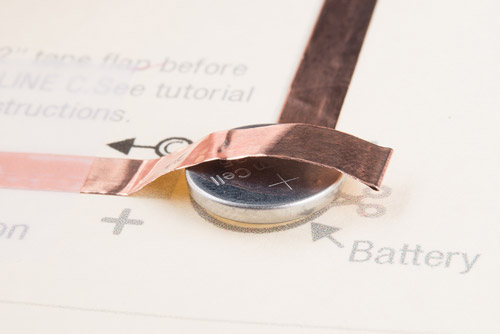 Now, press the button, and the LED should light up! 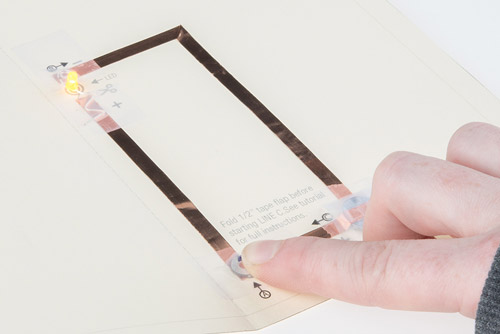 Here are what the finished circuits should look like: 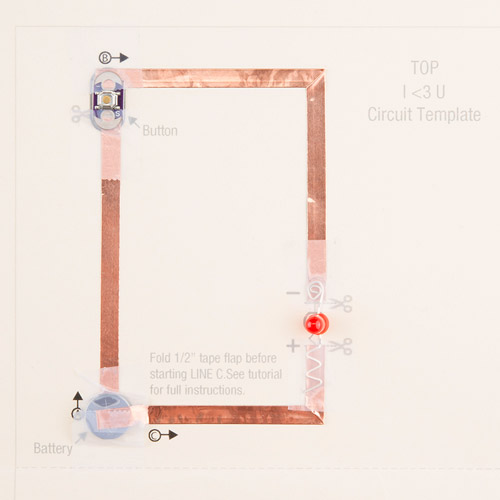 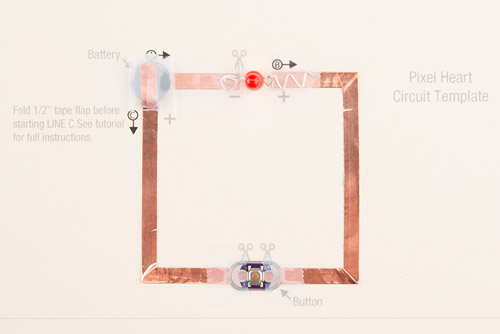 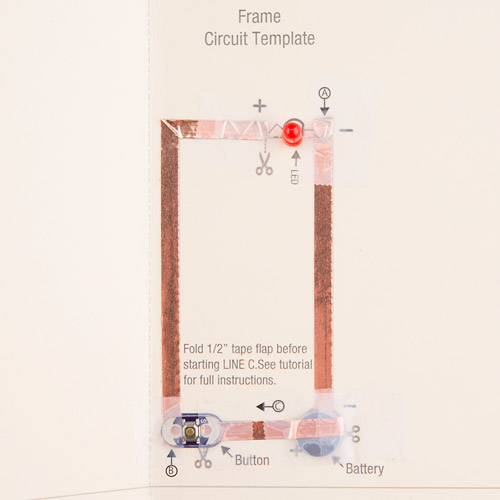 Time to cut out our pop up pieces. Click the links below to visit the pop up card’s website for full instructions on assembling.

Note: Glue a piece of vellum or parchment paper to the back of the heart outline before you fold the pop up to make it easier to attach.

The original project is in Korean, so we’ve included a tutorial we found a video on youtube showing you the process.

Note: This card can be tricky to pop up since there are so many small cuts. We’ve found using a pencil or thin marker to pull up the folds one at a time from the bottom of the heart up to the top makes it a little easier.

Note: Follow the folding instructions from the Window card in our Christmas Pop Up card tutorial. Use a piece of parchment paper or vellum behind the frame to create a base to attach stickers or cut outs, or draw on with markers. We chose a pet lovers theme, but feel free to create your own unique scene. 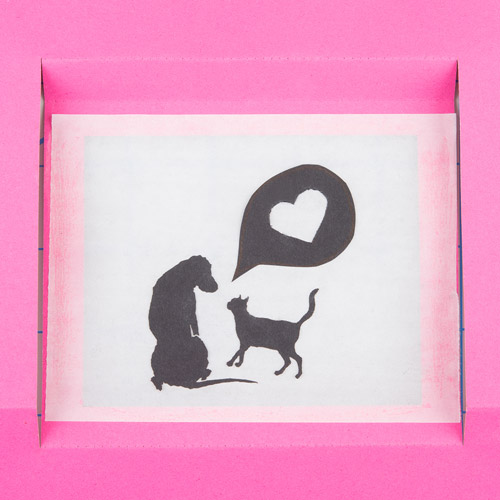 When your pop ups are constructed and ready to light, carefully place them over your copper tape circuit. Glue or tape the corners down to adhere to the backing. Gently fold down the pop up to close the card.

Finally, use a marker or stickers to indicate where the button should be pressed.

Add any extra decorations to make the card extra special. For Zelda fans, adding a “It’s dangerous to go alone! Take this.” screen shot to the outside of the pixel heart card adds a nice geeky touch - an idea we got from Instructables user Fungus Amungus’s version of this pop up card design. 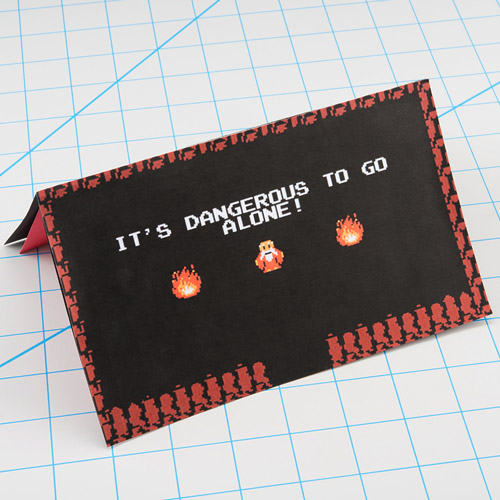 Switch to Blueprints
My Wish Lists
Last Added Items
Go to Wish List
You have no items in your wish list.